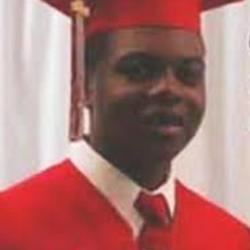 Laquan McDonald, 17, was shot to death by a Chicago Police officer Monday night, October 20, 2014 on the Southwest Side of the city. According to initial reports by police, officers found the 17-year-old “with a strange gaze about him” carrying a knife which he refused to drop when police ordered him to do so. Police said the teen used the knife to puncture the front passenger-side tire of a squad car and damage its front windshield before leading officers on a foot chase. Later evidence have revealed false statements by police who claimed that McDonald was killed by a single gunshot instead of the sixteen shots later shown to have been fired, was advancing on them in a threatening manner, was attempting to get up once he fell, none of which is apparent from the video evidence. Other witnesses also accused police of destroying video evidence.

In the video, McDonald is seen jogging and then walking in the middle of a street, roughly parallel to a line of cops and cop cars. He is starting to veer away from the officers when Officer Van Dyke empties a 16-round clip into him in about 15 seconds. Based on the video evidence, Officer Van Dyke has been charged with murder in the case.

Chicago Police Superintendent Garry McCarthy was fired a week after the dash-cam video was released.

On December 31, 2015, media reports indicated that the Independent Police Review Authority that is supposed to independently review police shootings in Chicago repeatedly communicated with Mayor Rahm Emanuel’s administration after the October 2014 shooting of Laquan McDonald — including giving a top mayoral aide lists of other police misconduct cases being reviewed by federal and county prosecutors. The emails raised questions about the scope of police misconduct in the city and whether the IPRA is truly walled off to investigate police-involved shootings without outside interference.

On January 17, 2016, two Chicago papers reported that nearly two dozen Chicago Police Department employees had been called to testify before a federal grand jury investigating the case, including four officers whose initial accounts of the confrontation with McDonald conflict with the squad car video of the killing. According to the report, other ongoing investigations are being conducted simultaneously by Cook County prosecutors and the U.S. Department of Justice, which is conducting a civil rights investigation of the Police Department.

On March 18, 2016, it was reported that Chicago's police union had sued the city to stop its inspector general from questioning officers that were on the scene when 17-year-old Laquan McDonald was shot and killed.

On May 5, 2016, Cook County State's Attorney Anita Alvarez recused herself and her office from the prosecution and asked the judge to appoint a special prosecutor, pleasing protesters and advocates who believed the state's attorney's office had a conflict of interest.

On June 2, 2016  a judge appointed a special prosecutor to handle the case, while civil rights attorneys pressed for a broader investigation into whether other officers at the scene attempted a cover-up. On July 29, 2016, LeRoy Martin Jr., presiding judge of the criminal division, named former Cook County judge Patricia Brown Holmes to look into whether the officers lied to justify the shooting. Lawyers for McDonald indicated that her investigation would potentially extend to police supervisors who were involved in any cover-up.

August 2016 Chicago Police Supt. Eddie Johnson is moving to fire seven officers accused of lying about the shooting of Laquan McDonald and its aftermath.

September 2016 Alma Benitez had just stopped for a bite to eat at a Southwest Side Burger King in October 2014 when she witnessed the now-infamous killing of 17-year-old Laquan McDonald by a Chicago police officer.

Benitez, who was headed home from the night shift at a nearby sandwich shop, was adamant from the beginning that Officer Jason Van Dyke had no reason to fire at McDonald, who was shot 16 times, including numerous times as he lay wounded in the street.

A Cook County judge on Thursday January 18, 2017 allowed as many as nine people to potentially testify about Laquan McDonald’s “violent and aggressive nature” at the first-degree murder trial of Chicago police Officer Jason Van Dyke.

September 2018  Chicago Police Officer Jason Van Dyke is ending his silence, giving multiple interviews this week ahead of his murder trial, which is scheduled to begin next week.

In September 2018, jury selection began in the murder trial. Initial jurirs chosen included a gay white man in his 60s who says he’s somehow never seen the McDonald shooting video — which has been viewed by millions, a stay-at-home Latina mother of three kids — all 10 or under — who says she respects police. a middle-aged white woman who’s a hospital record keeper and believes in hearing all the evidence before making a decision, a soft-spoken Asian-American man who’s a financial analyst, and white woman whose husband is a retired Navy veteran and defense contractor. Defense attorney Dan Herbert also made a veiled threat to waive Van Dyke’s right to a jury trial, complaining that jurors who have made disqualifying comments in questionnaires were being rehabilitated through questioning by the judge.

On October 4, 2018, Cook County Judge Domenica Stephenson, overseeing the conspiracy case against the three Chicago police officers who are charged with collectively falsifying evidence in the case, ordered key prosecution documents in the case unsealed Thursday morning during a hearing at the Leighton Criminal Court Building.

On January 16, 2019, a judge acquitted three Chicago police officers of trying to cover up the 2014 police shooting of Laquan McDonald to protect the white officer seen pulling the trigger.

On January 18, 2019, a judge sentenced Jason Van Dyke, the former Chicago police officer convicted of second-degree murder for killing Laquan McDonald, to more than six years behind bars on Friday.

On Friday, October 9, 2020, Jason Van Dyke ended his effort to overturn his conviction. An Illinois appellate court allowed to withdraw his appeal, meaning he will serve out his sentence without further court proceedings.

A coalition of ministers, elected officials and civil rights attorneys filed a petition Tuesday seeking the appointment of a special prosecutor to take over the prosecution of Chicago Police Officer Jason Van Dyke in the shooting death of Laquan McDonald — alleging that Cook County State’s Attorney Anita Alvarez is too constrained by a conflict of interest to handle it.

May 2016 Secret City hall meeting to get Laquan story straight.

September 2018  Chicago Police Will Have to Notify Dispatchers Whenever They Point a Gun at Someone: Report

On April 18, 2022, federal prosecutors said that they would not bring criminal charges against the Chicago police officer who served about three years in state prison after being convicted of second-degree murder in the 2014 shooting of Laquan McDonald.