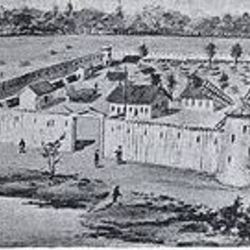 The Lachine Massacre, which took place on August 5, 1689; is considered to be one of the darkest moments in  French-Canadian history; but the merciless slaughter of the French settlers was only the climax to an unfolding  tragedy initiated by two headstrong and self-serving men.  One was Jacques-Rene De Bresay, Marquis De Denonville; then governor of the French residents in New France; and the other; Thomas Dongan, Governor of British interests in New York.

Taking advantage of a state of war between the two European powers; the opposing governors began campaigns to increase established boundaries and the residents of all communities were at risk.  Though Denonville was to make peace with the Natives, especially the Iroqouis; he instead led his allies in unprovoked attacks against Seneca and Onondaga villages in the Iroquois homeland.

He followed up his cruel attacks by enslaving 41 members of the Five Nations, and sending them to Marsailles to act as galley slaves.  He had once sought permission to establish a trade in African slaves, but was denied; so instead; supposedly acting on the advice of King  Louis XIV; he decided to get his human bounty closer to home.

This treachery would put the small French Colony on the verge of ruin, since, reportedly, on the advice of Governor Dongan; more than 1,200 Iroquois warriors retaliated, crossing the Lake St. Louis under the cover a hailstorm; and launched a massive raid against Lachine.  Of the 375 inhabitants; 24 were killed, 76 others taken prisoner, and fifty-six of the 77 buildings razed to the ground.

Though the Iroquois have been called cowardly for attacking innocent people without warning, the attacks were no more cowardly or cruel than those made on the Senaca and Onondaga villages that resulted in the deaths of many women and children; their fathers and sons chained to the oars of French ships, never to be heard from again.  It was a dark time for all.

Denonville would be removed from his post and replaced by Governor Frontenac (for his second term).  He would later be demoted and appointed assistant tutor to the children of the royal household.