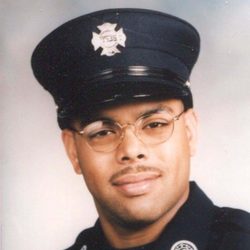 As a Buffalo firefighter, Kristian Woods helped deliver a baby girl and rescue someone from a burning home. He also was mentally ill and when off his medicine could turn paranoid and reckless — like he did one spring afternoon in 2012.

In a Walgreens parking lot, he swung open the passenger door of someone else’s car. Sweating through his T-shirt, Woods came face to face with a mother sitting with her 5-year-old twins.

“He had a very scary look in his eyes,” the woman told police.

He clenched the door, demanded her cell phone and said, “I’m coming with you.”

She shifted the Acura into reverse and shook him loose. But Woods hung around the lot to hound other customers.

When police arrived, Woods couldn’t explain himself. They would later write that he seemed confused by their questions — “stone-faced,” an officer said. They handcuffed their suspect, drove him to the police station and charged him with attempted robbery.

After 20 hours in the custody of police and then county jailers, he was taken to Erie County Medical Center. He shouted nonsense, struggled with his guards and said he wanted to die.

With his left arm held down, two mood-altering drugs went in. Woods went quiet within seconds, and a code blue was called. His heart had stopped.

Despite efforts to save him, Woods suffered permanent brain damage. He died five months later, in October 2012. The father of three was 40 years old.