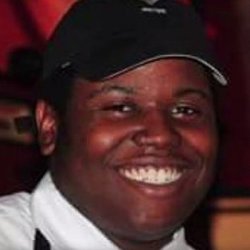 Kouren-Rodney Bernard Thomas, 20, was leaving a party when he was shot and killed by a man who told 911 operators he was part of the neighborhood watch.  The man said he was securing his neighborhood against armed hoodlums in a case reminiscent of the Trayvon Martin killing. Witnesses say no weapons were present at the party.

The shooting happened early Sunday morning when 39-year-old Chad Cameron Copley fired a shotgun from inside his garage and hit the victim, according to a Raleigh Police Department news release. He was arrested hours later, and jail records show the suspect was being held on a murder charge.

Thomas was leaving a house party when he was fatally struck, said the victim's mother, Simone Butler-Thomas.

Thomas, 20, was walking with a friend, David Walker, to their car parked down the street early Sunday when the shot came from the suspect's house, said Butler-Thomas, who talked with friends and witnesses to find out what happened.

She said the young men had arrived at the house party to find it had spilled outside, and decided to leave after about 15 minutes because the friend heard there were no girls there.

Raleigh Police said Copley, 39, was arrested hours after the shooting. Copley's lawyer, Raymond Tarlton, asked that his client not be judged until more facts are available.

During a 911 call from Copley's house shortly before 1 a.m. Sunday, a man said "we've got a bunch of hoodlums out here racing," and told the dispatcher he was taking action.

"I am locked and loaded. I'm going outside to secure my neighborhood," the man said. He asked for officers to come, but refused to give his address and hung up.

The caller told the dispatcher he was on the neighborhood watch. On a second call from the Copley home about seven minutes later, the man said he had fired a shot, and that someone was hit.

"We have a lot of people outside of our house yelling and shouting profanity. I yelled at them 'please leave the premises.' They were showing firearms so I fired a warning shot. And, uh, we got somebody that got hit."

Asked who was outside, the caller says: "There's black males outside my freaking house with firearms."

A GoFundMe page seeking donations for funeral expenses shows Thomas smiling widely in a dress shirt and black apron after a 2015 event he worked as a caterer.

His mother said she had moved with her three sons to North Carolina in 2001 for their safety.

Thomas had a job at McDonald's, a girlfriend attending East Carolina University, and was weeks away from moving into his first apartment, she said.

Copley was charged with murder for killing Thomas outside his North Carolina home, moments after a 911 call that reported "hoodlums," according to authorities and 911 tapes. On August 22, 2016, Copley was indicted for murder.

Trial was set to begin on Monday February 12, 2018. On February 21, Copley told the jury that Thomas had aimed a gun at him first, though he didn’t tell detectives that detail at the time. Copley was convicted of first-degree murder and sentenced to life in prison for shooting.

In the split 2-1 decision, the panel of the state Court of Appeals ruled that Raleigh resident Chad Copley, 42, deserved another trial in the August 2016 shooting death of Kouren Thomas, 20.