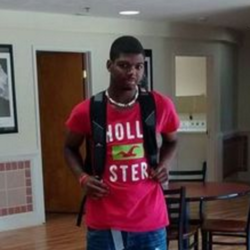 According to Roanoke County Police, Kionte DeShaun Spencer, 18, was shot and killed by police officers when he refused to drop a BB gun. Spencer lived in a group home and was enrolled at Hidden Valley High School.

Authorities said at around 7:15 p.m. Friday night 911 received a call about a black male wearing a bandana and hoodie waving a gun in the parking lot. He was also carrying a backpack.

Officers told Spencer several times to stop walking northbound on Electric Road, but he would not, according to police. Police say there were two attempts to tase Spencer, but neither were effective.

The Roanoke County police chief said two officers then fired shots at Spencer after he turned toward them. The weapon was still in Spencer's hand when he was shot according to the preliminary investigation by police.

Spencer was shot twice -- once in the hip area and once in the collarbone. He died that night at a hospital.

On May 25, 2016, it was reported that the officers involved in the killing of Kionte Spencer would not be charged. The Roanoke County Commonwealth’s Attorney determined the police officers who shot Spencer were “reasonably in fear for their safety,” WDBJ7 reported.