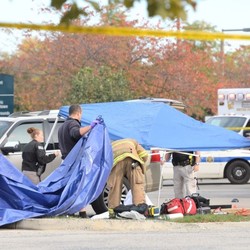 Kevin T. Brunson was driving a Lincoln Navigator Tuesday morning October 26, 2015 when troopers tried to arrest him. The vehicle had been identified as stolen during an armed robbery in Baltimore on the evening of Oct. 25. He was shot by a Maryland state trooper during a confrontation after he rammed the car of a Frederick Police officer. Initial police reports indicated Brunson brandished a gun, but none was found at the scene. A folding knife with a four-inch blade was recovered. Investigators are interviewing witnesses to see where the knife was during the trooper confrontation. Investigators are reviewing video from nearby businesses and from a camera in one of the state trooper cars. When the investigation is completed, the results will be presented to the Frederick County State’s Attorney’s Office for review.