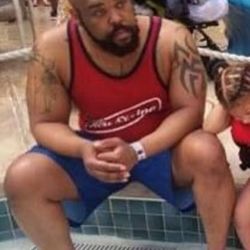 A Wisconsin police officer shot and killed 32-year-old Kevan Ruffin on Thursday July 2, 2020 after the man allegedly chased a woman with a pair of knives, though the man's family said police knew he had psychiatric issues and that they don't think he would have been killed if he wasn't Black.

Christopher Domagalski, the police chief of the city north of Milwaukee along Lake Michigan, said that the county dispatch center got a call around 5:50 a.m. about a man armed with a pair of three-pronged martial arts knives running at a woman in the street.

In an update, police said Ruffin chased the Sheboygan officer with weapons before being killed.

Authorities have not released the officer's name or race.

His body camera was recording at the time of the shooting, Domagalski said. The state Department of Justice is in the early stages of an investigation. The department issued a statement saying the officer has been put on administrative leave, which is standard in officer-involved shootings. Spokeswoman Gillian Drummond declined to comment.

The woman was taken to a hospital where she was treated and released.

Dozens of peopled mourned on the street where the shooting took place. Ruffin's family and friends wailed from behind police tape. They described Ruffin as a "teddy bear" who was a former cheerleader at South High School and liked to teach himself languages.

Ruffin's cousin, Shem Clayborn Jr., said Ruffin suffered from a mental disability and that police knew it. Court records show that Ruffin was charged with various crimes between 2008 and 2019 but was often found not guilty because of mental health issues or the charges were dismissed.

On August 6, 2020, Sheboygan County District Attorney Joel Urmanski said in a decision after reviewing the evidence that included surveillance footage from a local business of the full encounter between Ruffin and Pray that he found Pray's use of deadly force reasonable and that no charges should be issued against him.