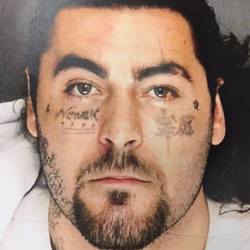 Officer Joe Silva told the Stockton Record the pursuit began Sunday when officers on patrol saw a man hitting a woman on a city street. When they approached the man, he fled in a stolen car and led them on a chase. Silva said other officers who got involved in the chase rammed the suspect's car to stop him. When they got out of their squad car to arrest him, Silva said the suspect drove toward the officers, prompting them to fire at him several times. The suspect was taken to a hospital, where he died.