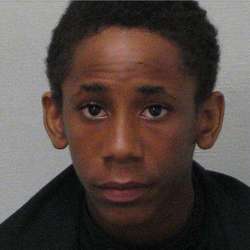 Sgt. John Nobles spotted the stolen car with two people nearby about 2 p.m. in a cemetery, Bruno said. The suspects saw the officer, then ran toward their vehicle. They tried to ram Nobles’ patrol car off the road while fleeing the area, Bruno said. Nobles gave chase until the suspects turned down a dirt road in the 1800 block of Helena, lost control and struck a tree. Both the driver and the passenger got out with guns in their hands as Nobles arrived, Bruno said. The passenger saw Nobles and threw his gun toward the front of the wrecked car. The driver turned toward Nobles and pointed his gun at the officer, but didn’t fire and ran.