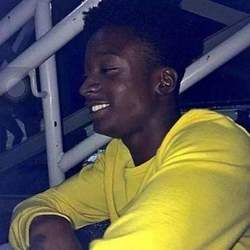 Keith Harrison McLeod, 19, was shot to death by a Baltimore County police officer in Reisterstown Wednesday after trying to pass off a fake prescription at a pharmacy, then running from the officer, police said. An employee at Nature Care Pharmacy in the Reisterstown Village shopping center in the first block of Main Street called police just before 5 p.m. to report the fake prescription, police said. The responding officer saw the suspect in the shopping center parking lot and chased him across the street to the parking lot of the Word of Life International Church, where a "confrontation" occurred and the officer fired multiple shots, Baltimore County police spokeswoman Elise Armacost said.

Detectives pulled a video from a nearby business that is embedded below. Witnesses said that "they heard the officer repeatedly giving the suspect commands to 'stop,' and that they heard the suspect shouting profanities at the officer," the police statement said. McLeod was taken to Northwest Hospital where he was pronounced dead. Police said the officer fired three shots, and the medical examiner confirmed he was shot three times. Police also said on Thursday that no weapon was found at the scene.