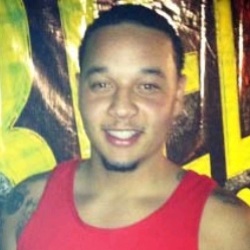 Las Vegas police said they thought 23 year old Keith Childress was holding a gun when they shot and killed him in the west valley on December 31, 2015. Instead, Childress was holding a cell phone in his right hand, hidden from view as he approached officers. He did not follow multiple orders to stop, show his hand and drop what he was holding, Metro Capt. Matt McCarthy said. So officers shot him "several" times. Childress was wanted out of Arizona on violent felonies, and U.S. Marshals were conducting surveillance on him just before the shooting. But around 2 p.m. he fled into the Monaco Cove planned community, just north of Desert Breeze park, and Metro said the marshals asked police for help. The officer asked if she'd seen a black man running. When she said no, he told her, "Go inside and lock all your doors." Minutes later, two officers happened upon the wanted man a few houses down from Denehy's, in the 8300 block of Gilded Crown Court. "As the officers believed that the suspect was wanted for attempted murder, as this was a residential area, as they believed he was armed with a firearm, they discharged their firearms on the subject, striking him several times," McCarthy said.

Family members say Childress was not wanted for attempted murder. A public records search in Arizona showed that Keith Childress was convicted of several crimes including aggravated assault, burglary and armed robbery but failed to show up for his sentencing and a warrant was issued for his arrest.