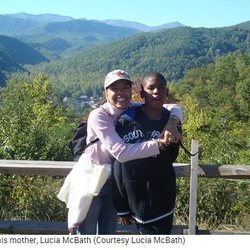 A bizarre and tragic police shooting in the tiny Florida town of Gretna has residents there wondering how a police officer called to a home to help a mentally ill man take his medication ended up taking the young man into a bathroom where he shot the man dead, firing at least three shots.

According to police, Kaldrick Donald and Charles Brown somehow got into a fight. But according to Juanita Donald, her mentally ill son “didn’t want to be bothered” and was simply trying to walk away from the police officer when the physical altercation began. That altercation, she said, was started by Brown who grabbed her son and first shot him with a taser. At that point, the situation took a deadly turn. “He rushed my son off in the bathroom and I heard three shots,” Juanita Donald said. “I was like, ‘You shot my son.’ And he was like, ‘I had to.’ I said, ‘No, you didn’t have to.” The mom said that after the shots she heard her son say, “‘I want my mama,’ after he shot him, and then I didn’t hear anything else.”