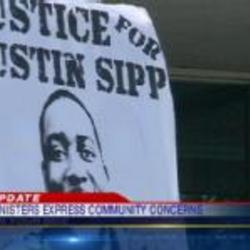 Sometime around 5:30 a.m., on March 1, 2012, an off-duty policeman working for a private neighborhood security force stopped two young black men driving in a predominantly white neighborhood in New Orleans. The officer called for back up. The incident tragically ended in the shooting death of Justin Sipp, the 20-year-old passenger of the car, who was African-American, as well as non-fatal injuries to two of the officers and to Justin's brother Earl who was the driver of the car.