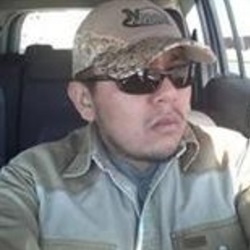 Justin Fowler, 24, of Littlewater and Navajo Nation Police Officer Alex Yazzie both died from gunshot wounds during the incident. Officers Herbert Frazier and James Hale were hospitalized, each with a gunshot wound to the leg.

According to police, Fowler, a suspect in a domestic violence incident, had left a trail of mayhem between Little Water, N.M. and Red Valley, Ariz., Thursday that ended with himself and a Navajo Nation Police officer dead, two officers wounded and two police cars disabled, according to information released by the Navajo Nation President’s Office.

By the time Dez arrived from Shiprock, Justin Fowler had left the scene and was sitting in his car along U.S. Highway 491, Tome said. Fowler then discharged his weapon, an AR-15 semi-automatic rifle, at Dez, but Dez took cover behind his vehicle and was unharmed. Fowler then fled the scene in his vehicle.

Dez called for backup and the police had set up a mobile command center at Little Water to prepare for a manhunt when at 8:20 p.m. Fowler, “in an apparent taunt,” appeared in his vehicle at the command center and made a U-turn, Tome reported.

Police Lt. Phillip Joe and several other officers got into their vehicles and pursued Fowler, who turned up Navajo Route 13 headed to Red Valley.

About five miles south of the Red Valley Trading Post, according to Tome, Fowler — who was wearing a bulletproof vest — got out of his car and fired at the police vehicles, disabling the one driven by Joe.

Fowler then got back in his car and resumed his flight toward Buffalo Pass, but about 11 miles south of the post, he abandoned his car and, as the officers got out of their vehicles, began firing at them. Police returned fire, fatally wounding Fowler, but not before he had shot and killed Yazzie and wounded Frazier and Hale.