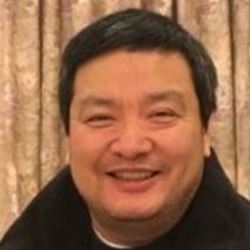 The man accused of stabbing a North Royalton police officer before another officer fatally shot him had a history of mental illness, his sister said.

Jun Wang, 45, died Friday after an officer shot him at a condominium on Independence Drive. Officers had gone to the condo to serve a probate order and take him to St. Vincent Charity Medical Center, police said.

Wang became defiant during the encounter, grabbed a knife and stabbed an officer's face and leg, police said. The officer's partner then shot Wang.

Wang had been diagnosed with schizophrenia and bipolar disorder and spent time in mental health hospitals, his sister Julia Rielinger said Saturday in a phone interview with cleveland.com.

Wang had not been taking his medication at the time of the shooting, Rielinger said. Wang had been staying at her condo but she sought a probate order to get him medical treatment.

Wang and Rielinger grew up in China before emigrating to the U.S. Wang primarily speaks Mandarin Chinese and the language barrier made it difficult for him to communicate with the officers during the encounter, Rielinger said.

Rielinger believes her brother became scared when the officers arrived. Wang then ran upstairs and grabbed the knife, she said.

The wounded officer is being treated for non-life-threatening injuries at MetroHealth, police said. The officer is expected to be on medical leave from the department for a "long while," Detective Dave Loeding said Saturday.

The officer had been aware of Wang's mental health issues due to the probation order, Loeding said.

The officer who shot Wang has been placed on paid administrative leave, which is standard procedure after officer-involved shootings, Loeding said.

The Cuyahoga County Sheriff's Department is handling the investigation into the shooting.