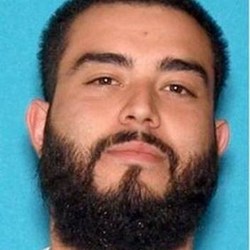 24-year-old Vallejo man, Juan Ayon-Barraza was shot and killed by police after he had kidnapped and shot a woman then dumped her on a roadside in Moraga, police said Friday.

The man was identified as Juan Ayon-Barraza, Vallejo police said. He had kidnapped a 29-year-old woman in Vallejo on Thursday morning and shot her before dumping her in Moraga, police said. She remains hospitalized in critical condition.

Vallejo police received a call shortly after 8 a.m. Thursday from concerned family members who reported the woman missing, saying she had last been seen around 7:35 a.m. with Barraza on the 900 block of Kentucky Street, police said.

That morning she told her family she would return after getting breakfast with him, but the family was disturbed when Barraza called them with an “unsettling” message that left them extremely concerned for her well-being, Vallejo police said.

Family members confronted Barraza in person to find out where the woman was, but he was evasive and fled. Detectives with Vallejo police began working the missing-person case.

Around 6:45 p.m., a concerned citizen in Moraga called 911 after seeing someone dumping what appeared to be a body on the roadside from a white van near Pinehurst Road and Skyline Boulevard, authorities said.

Officials confirmed that the woman left in life-threatening condition by the road was the missing person from Vallejo. She was unresponsive but alive when found. Officials took her to a hospital where she is being treated for at least one gunshot wound and remains in critical condition.

Oakland police officers responding to the scene attempted to pull over the white van, but the Barraza sped away and led authorities on a chase to Richmond.

In the area of South 37th Street and Stege Avenue, authorities said, the suspect later identified as Barraza rammed his car into an Oakland patrol unit and wounded two officers who were getting out of their vehicle. Barraza then pulled out a gun and pointed it in the direction of officers, who opened fire and struck the suspect multiple times, said Sgt. Aaron Pomeroy of the Richmond Police Department.

Barraza, who was alone in the car, died at the scene.