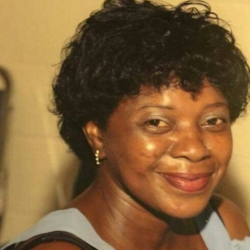 Joyce Curnell, 50, of Edisto Island was found dead in her cell about 5 p.m. Wednesday, a day after she had been arrested on a two year old shoplifting charge arrest warrant for stealing a candy bar from a convenience store, sheriff’s Maj. Eric Watson said. Before she was brought to the jail, she was seen at an area hospital for an apparent medical issue, Watson said.

The thing that bothers me the most about the tragic passing of Joyce Curnell, is that her son just wanted to get his mom some help and he didn't know where else to turn. He didn't know what resources were available and he didn't even know he could call 211 to find out.

According to a report on February 24, 2016 court documents filed that week reveal that during the time she was in custody, she became too sick to eat or call for help. She vomited all night and couldn’t make it to a bathroom, so jailers gave her a trash bag. A medical expert told her family’s lawyers “that the persistent vomiting likely triggered her sickle cell disease, which worsens dehydration,” writes the New York Daily News. She was left 27 hours without water. Some medical staffers ignored the jail officials’ requests to tend to her, the documents alleged. The filing cited expert opinion from a local doctor, who said Curnell’s death “more likely than not” would have been prevented if she had been properly treated for gastroenteritis and dehydration.

“Ms. Curnell died because she was deprived of water,” Doctor Maria Gibson of the Medical University Hospital said, pointing to “a series of conscious violations.”

Those types of deadly mistakes aren’t unique. Medical neglect is all too common in prisons and jails across the country. Corrections staff have refused to treat inmates with health problems as serious as Hepatitis C and cancer. People doing time have been told to pray and called liars in lieu of care.

“It’s very clear that (the jail staff) recognized her sickness; they just didn’t act on it,” said Moore, the family attorney. “This woman was left to die in such a painful and undignified way.”

See also the case of Michael Anthony Kerr another inmate who died from lack of water.

The Post and Courier also reports a notice has been filed by Curnell’s family.The notice seeks to sue the jail’s contractor- the Center for Occupational Health. Citing expert opinion from a local doctor who says,

“More likely than not, Curnell’s death would have been prevented if she had been properly treated for gastroenteritis and dehydration.”

A lawsuit should follow, if a settlement is not reached. While a monetary settlement won’t bring Curnell back, it will send a message. It lets people know we are not going to let this keep happening without fighting back.