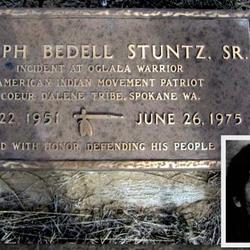 Ninety-nine years and one day after General George A. Custer and 274 of his 7th Cavalry soldiers died in a famous battle, another firefight 200 miles to the east in Pine Ridge, South Dakota still reverberates in modern history. Following an alleged routine and seemingly low priority FBI investigation, 2 agents were shot to death and a Native man, Little Joe Stuntz Killsright was also shot and killed by a BIA marksman after the agents had died. The original firefight was estimated to last 10 minutes, starting around noon, and as more agents and law enforcement arrived, AIM members continued to fire and hold back these reinforcements for several hours before getting away. The two dead agents were recovered around 4:30.

Among the AIM members identified that day of the firefight at the Jumping Bull Compound were Leonard Peltier, Bob Robideau, Dino Butler, Norman Charles, Michael Anderson, Frank Blackhorse and Joe Stuntz. To commemorate the day and remember Joe Stuntz, native historian Hank Adams posted this on his Facebook page.

"On June 26, 1975, Special Agents Jack R. Coler and Ronald A. Williams of the Federal Bureau of Investigation (FBI) were on the Pine Ridge Reservation searching for a young man named Jimmy Eagle, who was wanted for questioning in connection with the recent assault and robbery of two local ranch hands.  Eagle had been involved in a physical altercation with a friend, during which he had stolen a pair of leather cowboy boots.

At approximately 11:50 a.m., Williams and Coler, driving two separate unmarked cars, spotted, reported, and followed a red pick-up truck which matched the description of Eagle's. Soon after his initial report, Williams radioed into a local dispatch that he and Coler had come under high-powered rifle fire from the occupants of the vehicle and were unable to return fire with their .38 Special revolvers. Williams radioed that they would be killed if reinforcements did not arrive. The FBI, BIA, and the local police spent the afternoon waiting for other law enforcement officers. At 2:30 p.m., a BIA rifleman fatally shot Joe Stuntz, an AIM member who had taken part in the shootout. At 4:31 p.m., authorities recovered the bodies of Williams and Coler from their vehicles.

Finding: Joseph Stuntz Killsright, aka Joseph Bedell Stuntz (TN), was shot and killed 06/26/75, during the RESMURS investigation. Stuntz was seen shooting at FBI SA’s Williams and Coler at Jumping Bull Community and his body was subsequently found alongside the Green house near the edge of the cliff. Stuntz was apparently shot by a law enforcement officer at the scene. When the body of Stuntz was found, he was wearing a SWAT fatigue jacket with “F.B.I.” on the back, belonging to SA Coler, that had apparently been taken from the trunk of SA Coler’s vehicle after SA Coler was murdered.”

For a detailed accounting from the FBI about the Jumping Bull Firefight, deaths of their agents, the subsequent flight and arrest of the AIM suspects, the Cedar Rapids trial of Robideau and Butler, the extradition and trial of Leonard Peltier, go to the FBI website, titled, The RESMURS Case. https://www.fbi.gov/minneapolis/about-us/history-1/the-resmurs-case

A commentator on Hank Adams posting suggested reading, Ken Stern's book, Loud Hawk: The United States versus the American Indian Movement (Univ. of Okla. Press, 1994). There is evidence showing that a bombing at Mt. Rushmore on the following day, June 27, 1975, may have been set up by FBI informants or infiltrators, since there was never any follow up to the incident. The FBI was just about to undergo hearings by the Senator Frank Church committee on domestic spying and the COINTELPRO program targeting the Black Panthers, the anti-war movement and AIM. The timing of the Jumping Bull Compound Firefight which occurred based on the strange low-priority investigation and the non-reporting and non-investigation of the Mt. Rushmore bombing, have led researchers to think that the FBI was trying to influence the Church Committee Hearings with these incidents. Perhaps the FBI did know Leonard Peltier was in Pine Ridge and the agents were sent in on the “cowboy boots theft” but couldn’t be reached in time to help them.

There is conflicting evidence and testimony on the red pick up truck, since Peltier had a similar red truck and the FBI may have been tracking him all along; and a weapon used in the firefight, an AR-15, that was tied to Peltier and was burned in a car accident that had conflicting tests results. There is also major differences in evidence and testimony at the two trials, the first in which Robideau and Butler were acquitted and the second when Peltier was found guilty. In addition, the judges involved at different stages of Peltier’s case declined to force the FBI to release hundreds of pages of files due to national security and potential harm to agents. A vocal and vindictive contingent of FBI and law enforcement have consistently waged a media campaign to deny Peltier any hearings, parole or pardon since President Bill Clinton considered a pardon in 2001 among the 450 he did issue up until his final day in office.

Every June 26, remember The Battle of the Greasy Grass, remember Leonard Peltier and remember Joe Stuntz.