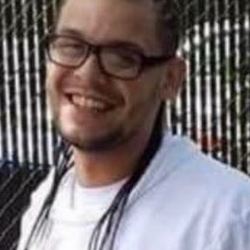 Jose Soto, 27, was shot and killed by police officers from multiple agencies and SWAT members who swarmed a home on Oak Street in Manchester, Connecticut after officers from the state Department of Correction, Parole Division, assisted by Manchester police, attempted to take him into custody for a violation of parole stemming from his conviction for Robbery in the First Degree.

According to police, when officers entered the home, Soto threatened to start shooting. A SWAT team responded and a standoff ensued.

He was taken to Hartford Hospital, where he was pronounced dead.

Soto's mother was in the home at the time, according to officers.

CREST is a regional SWAT team made up of officers from the Coventry, Cromwell, East Windsor, Enfield, Glastonbury, Manchester, Rocky Hill, South Windsor, Vernon, Wethersfield, and the University of Connecticut police departments.

Officials said none of the officers on CREST wore body cameras.

It led to a standoff at Soto's family members told FOX61 he has mental health problems.

"He has PTSD. He has mental illnesses. He's saying things out of anger and out of being scared," said Danisha Soto, sister of Jose Soto.