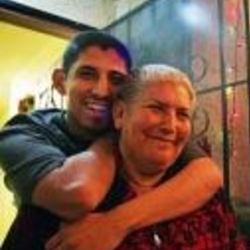 Anaheim will pay a man in state prison $2.5 million to settle a federal civil rights lawsuit alleging police used excessive force when he was run over by a patrol car while standing on the sidewalk surrendering to police.

Jose L. Munoz had his hands in the air and was facing a police officer who approached him on foot when Officer Eddie Ruiz drove a cruiser on the sidewalk and hit him from behind at 32 mph, the lawsuit alleges.

Munoz, of Anaheim, ended up underneath the car with his abdomen ripped open and internal organs exposed, according to court records.

The Anaheim City Council agreed to the payoff during its meeting last week.

"My client wasn't a threat to the officers," said Montebello attorney Arnoldo Casillas. "He was giving up. This was clearly a case of excessive force. Our hope is that this award will help Jose turn his life around."