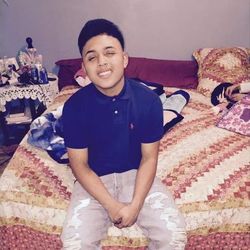 An off-duty officer said he saw Cruz and another teenager breaking into a car near his apartment complex before the pair fled in their own car. The officer pursued Cruz and fatally shot him after the pursuit ended in a crash and they got into an altercation, police said.

A sixteen-year-old boy is dead following an officer-involved shooting in Addison, Texas. Police said an off-duty officer attempted to intervene during a “crime in progress,” but the situation escalated to a car chase and gunfire.

“If he did something he shouldn’t be doing, then he should be arrested – not shot,” said the teen’s cousin, Nora Rubi, who gathered with the teen’s family to demand answers at Addison police station on Monday night, according to The Dallas Morning News.

In surveillance footage obtained by WFAA, Johnson’s black Chevrolet Tahoe appears to hit the back of the Challenger, which then spins out of control at the intersection by a Shell station in Addison.

Police said after an “altercation,” Johnson fired his gun, hitting Cruz and his passenger. Details of the altercation have not been released. Cruz died at the scene. His passenger, Edgar Rodriguez, was shot in the head, but is expected to survive.

The police officer was not injured but is claimed to have feared for his life, according to The Dallas Morning News. Johnson repeatedly told them he was a police officer, and police have declined to say whether Cruz or Rodriguez were armed.

Johnson fired his duty weapon “because he was in fear of his life and he felt that fear was justified,” attorney Chris Livingston told the Morning News.

Cruz’s family and others have called for a thorough investigation.