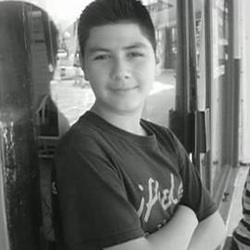 Miami-Dade Police identified Jorge Santiago Tapia, 15, as the person walking into a Walgreens store wearing a blue bandana over his mouth and neck and wearing sunglasses. Surveillance video shows the Coconut Palm Academy 8th grader walking up to the clerk with a gun in his left hand and demanding cash. It all started just before 2 a.m. when a call to 9-1-1 said an armed man in a mask robbed a Walgreens at SW 288th Street and South Dixie Highway. Police say he threatened the clerk at gunpoint. Arriving officers spotted a car that matched the description of a vehicle that the armed man drove off in. After a brief pursuit, Zabaleta said Santiago’s car got a flat tire and came to a stop. A total of seven officers fired at the man who was killed. It’s not clear if the man shot at the officers. Police recovered a handgun and backpack from the man’s car. None of the officers were injured. The Florida Department of Law Enforcement is investigating whether the shooting was justified.