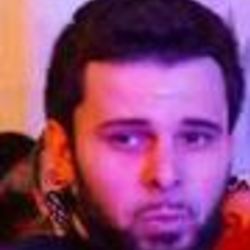 Officers opened fire on Jorge Gomez, 25, killing him near the Foley Federal Building and U.S. Courthouse while dispersing a protest. Police said that after officers began dispersing the crowd, Gomez confronted Metro and federal officers stationed near a stairway in the building.

He ignored commands to walk away, and an officer fired a less-lethal shotgun round at him to make him disperse. Gomez, who was open-carrying three firearms, took off running north, and lifted one of his guns in officers’ direction, Jones said. They opened fire to produce a second shooting scene, this one on Bridger Avenue and Las Vegas Boulevard.

Gomez, who was wearing a tactical vest, was captured in Sun video and photographs holding a sign that mentions President Donald Trump, the terms “jail” “change” and “2A,” short for the Second Amendment.

Police believe Gomez attended the protest alone. His only other prior arrest was for drugs, Jones said. The shootings occurred almost simultaneously after 11 p.m.