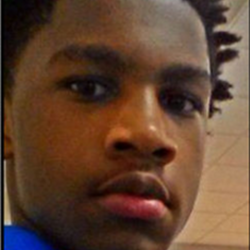 Police said Jorevis was fatally shot when he pointed a gun at an officer while trying to flee. He was one of two passengers to leave a vehicle that officers had stopped based on a suspicion that it was stolen in a carjacking the previous day. The medical examiner said Jorevis died from a single shot to the right side of his back.

St. Louis Chief Medical Examiner Dr. Michael Graham says Jorevis was shot once in the right side of his back, and the bullet passed through both lungs and his heart, according to the St. Louis Post-Dispatch.

"Everything I've see is consistent with the officer's account," Graham told the paper.

"As I understand it, the kid was running with his arm up, shooting or pointing the gun at the officer, who was kind of behind him."

We've reached out to Graham for comment; we'll update if we hear back.

Dr. Michael Graham has issued the following statement about the shooting: "The cause of death was a sing gunshot that entered Mr. Scrugg's body in the mid-portion of the right side of the back (below and somewhat to the right side of the shoulder blade). The bullet traveled forward, upward and leftward striking his heart and each lung. The injury is consistent with the officer's account of the incident."