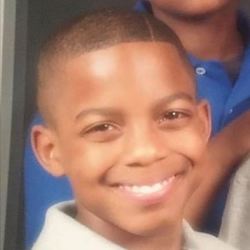 An unarmed 15 y/o child died after being shot in the head by Balch Springs PD (TX). A cop shot muliple rounds into a car filled with teens.

Community members are asking questions about why an officer fired into a car, killing an unarmed 15-year-old boy.

According to Balch Springs police, officers responded to a report of intoxicated teenagers on a residential street in the 12300 block of Baron Drive at 11 p.m. Saturday. When they arrived, officers said they heard gunfire.

"There was an unknown altercation with the vehicle backing down the road towards the officers in an aggressive manner. [This claim was later retracted by the police chief] An officer shot at the vehicle, striking a front seat passenger. The individual was transported to the hospital where he was pronounced deceased," according to a news release by the Balch Springs police.

Police are not identifying the boy, but friends and Attorney Lee Merritt say it was 15-year-old Jordan Edwards. Many of his coaches and community members showed up at the news conference Sunday afternoon demanding answers. They said he was a great kid. Some of his friends were brought to tears.

The chief has already met with the family of that boy and has expressed his condolences. The department has turned over its investigation to the Dallas County Sheriff Department, who was also called to work the scene.

WFAA reached out to the Dallas County Sheriff's Department, but have not yet heard back on their investigation.

Balch Springs police did not identify the officer involved, but they say he has been placed on administrative leave.

We are grateful the decision has been made to terminate the officer responsible for Jordan’s murder. Over the past 24 hours Chief Haber has made commendable strides toward justice. However, there remains a long road ahead. We anxiously await this officer’s identification and arrest for the crime of murder.

The magnitude of his horrible actions cannot be overstated. We fully expect an equivalent response from those responsible for investigating and punishing the crime. We also know that although his actions were the most wicked and consequential, he was not the only officer responsible for dreadful behavior that evening.

After Jordan’s two brothers, Vidal and Kevon, along with their two friends, were forced to experience this tragedy up close as occupants of the car, they were immediately treated as common criminals by other officers; manhandled, intimidated and arrested, while their brother lay dying in the front seat.

The officers who extended this nightmare for those children ought to be properly reprimanded as well. Our family is working hard to deal with both the loss of our beloved Jordan and the lingering trauma it has caused our boys.

May 2017 Officer charged with murder

May 2017 Family statement in response to officer being charged

May 2017 Father sues Murderer of son

May 2017 Department of justice to investigate the murder

May 2017 Dallas County committed to conviction

On August 28, 2018, Roy Oliver was convicted for the 2017 slaying of 15-year-old Jordan Edwards and sentenced to 15 yrs in prison plus a $10,000 fine.  In a rare guilty verdict in a police shooting case, the Dallas County jurors were not swayed by Oliver's claim that he feared for his partner's life when he fired into the vehicle. His partner told jurors he didn't fear for his life.

In April 2019, attorneys for former Balch Springs officer Roy Oliver filed their appeal in the case.

On August 10, 2020, a Texas appeals court upheld the murder conviction and 15-year sentence for Roy Oliver, a former Balch Springs officer who fatally shot a Edwards.

Moments ago, Charmaine and Odell Edwards buried their baby boy. In a private funeral for friends and family, through tears, sobs and wails, loved ones recounted their memories of a young man who was universally loved by all.

Jordan Edwards, 15, should be playing basketball or video games with his friends today, wrapping up what could only be called a perfect freshman year at Mesquite High School outside of Dallas.

When Officer Ray Oliver of the Balch Springs Police Department fired three completely unnecessary shots from a rifle into a car full of innocent teenagers, he brutally ended the life of a star, an eagle, a son and brother with limitless potential. The loss has gripped the nation, turned a community upside down, and forever traumatized a family in the most painful way imaginable.

The Dallas County District Attorney's Office was right to file murder charges against Ray Oliver on Friday evening. The chief of police was right to fire him. Both of those steps, however rare, are not enough.

We've seen this before. A termination and an arrest are not a conviction. Ray Oliver must be convicted for this crime. He must serve hard time in state prison for what he did.

Even then, the scales of justice will not be balanced. The injustice of having Jordan Edwards snatched from this earth with a bullet to his forehead will not be made right by sending his murderer to jail. It must happen, but it's not enough.

The family of Jordan Edwards should receive a record financial settlement for what's been heaped upon them. Negotiations for this settlement should not drag on. The county should literally find the highest settlement a family has ever received for police brutality and top that amount. That's what has to happen here.

But even then, it will not be enough. Because here is what I know: Odell and Charmaine Edwards would trade all of that — the convicted officer and a huge sum of money, to have their son back.

If justice is fairness, if justice is balance, then I truly don't know how Dallas makes this right. Justice would be Jordan Edwards being alive and well — without most us even knowing his name or his story, because he's just an ordinary boy in an ordinary family living his life.

But we don't have that option.

In the days ahead, based on my conversations with the family of Jordan Edwards and their legal team, I am expecting them to call for much more than a conviction in the murder case against Roy Oliver.

The family and their attorneys must be allowed to see every second of the body camera footage from this past Saturday evening. Jordan's brothers have both said it will show the officers not only being flagrantly disrespectful and offensive after the shooting, but also explicitly racist. These other officers, who detained Jordan's brothers and their friend, should be held fully responsible.

Every single piece of paperwork related to this case must released to see if any false reports were filed. My expectation is that there were, particularly based on the patently false statement released by the department in the days after the shooting — which they eventually recanted. Every single officer who filed a false report must be fired and even charged with violating their oath of office.

Lastly, the family is going to call for significant policy changes to be addressed that impact policing (and police brutality) in Dallas, in Texas, and throughout the country.

This family, before any of this ever happened, already had enough on their plates in their everyday roles as parents and spouses. Now, as victims, they find themselves considering a new role as advocates for change. They didn't ask for this, but here we are anyway.

The Edwards family now joins a long, tragic line of tens of thousands of victims of police brutality in America, but now our country has a chance to at least attempt to do right by this family. I haven't always been this way, but I'll believe it when I see it.

May 2017 Video emerges of more Balch Springs police misbehaviour from 2016 with a man handcuffed behind his back being tasered as an act of spite.

May 2017 Dan Rather Tribute

June 2017 Rally for Jordan in Dallas

The cast and crew of Netflix series Dear White People honored the life and legacy of Jordan Edwards with a scholarship fund created in partnership with Jordan’s family and the Black Alumni Association.