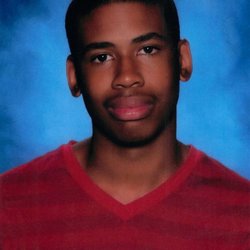 17 year-old Jordan Davis was shot and killed by a white man agered by the loud music he and his friends were playing.

On the night of Nov. 23, 2012, Davis and his three friends were parked at a gas station in Jacksonville, Florida in their red Dodge Durango playing music loudly when Dunn pulled into the space next to them.. There, they were confronted by Michael Dunn, 45, who objected to the loud rap music blaring from the teenagers’ car.

According to the testimony of Davis’s friend Tevin Thompson, who was in the car with him, Dunn leaned over and asked them to turn the music down. Thompson obliged and lowered the volume, but Davis objected. “Fuck that, nigga, turn it back up,” Davis said.

An argument ensued, and Dunn retrieved a loaded handgun from his car and fired 10 shots into the boys’ car, killing Davis.

This killing was memorialized in an HBO documentary 3 1/2 Minutes, Ten Bullets. The trailer for the movie is embedded below.

At trial, Dunn’s defense team cited Florida’s stand-your-ground law, but on Oct. 1, 2014, Dunn received life in prison without parole for the murder of Davis.