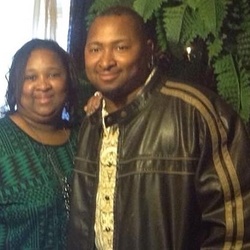 Clarke Co. coroner Greg Fairchild confirms 39-year-old Jonathan Sanders died Wednesday night. Stonewall police Chief Michael Street confirmed that an incident did happen between 10:30 and 11 p.m. when an officer encountered an individual. Sanders, who trained horses and was often seen riding around in a horse-drawn buggy, was at a gas station with one of his animals at about 10 p.m. Wednesday when he saw an altercation between Officer Kevin Herrington and another white man, whom Sanders knew. According to Sander's attorney, Lawrence, Sanders approached them and asked Herrington to leave the other man alone. A witness told the attorneys that after Sanders left, Herrington allegedly said, "I'm gonna get that n****r." Lawrence said multiple eyewitnesses have told the attorneys that Herrington then got in his car with an unidentified civilian female and drove after Sanders, who was on his buggy. Three eyewitnesses who are related to Sanders by marriage, and who say they saw the altercation from their home, said the officer turned on his police lights when he was just behind Sanders. The lights startled the horse, which took off at a sprint, throwing Sanders off his buggy.

"Jonathan immediately began to run after his horse, unaware of what was going on behind him," Lawrence said. "Herrington proceeded to chase Jonathan." Herrington allegedly grabbed a headlight tied around Sanders' head, pulling it down to his neck and yanking him to the ground. Sanders' body was slumped down in a "praying position" as Herrington allegedly wrapped his arms around the man's neck, placing him a chokehold, Lawrence said. The three witnesses in the home told the attorneys the officer would not release his grip. At the time, the witnesses said, they were not aware that the man in the officer's grip was Sanders, their relative. One of the witnesses, who works as a correctional officer in Stonewall, came out to confront Herrington, allegedly asking the officer to let Sanders go. Herrington told the correctional officer that Sanders had reached for his gun, according to the attorneys. Sanders was allegedly placed in a chokehold for more than 20 minutes before EMTs arrived.
Sanders' girlfriend, Charita Kennedy, says Sanders had his horse buggy equipped with the proper lights and wasn't violating any laws. She says Sanders told the officer he could not breathe after he began choking him, and he died there on the scene. She says then Sanders was taken to the hospital where his family was not allowed to see him. Sanders was a father to two children, and Kennedy says she's devastated their one-year-old child will have to grow up without a father.

Attorney Stewart Parish, who was Sanders' attorney and is acting as a spokesperson for the family, said that witnesses have told him Sanders was exercising his horse Wednesday night when he ran into a friend and had a conversation. At the end of the discussion the friend went to the Cefko gas station. It's unclear where Sanders was when he called his friend's brother and said, "You might want to go check on your brother, the cops are harassing him at the Cefko."