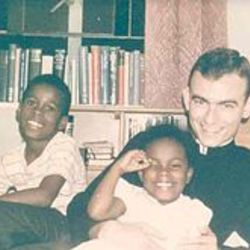 A seminary student at Episcopal Divinity School in Cambridge, Massachusetts, Daniels was yet another clergyman who responded to King’s plea for advocates to attend the planned march from Selma to Montgomery. While participating in a demonstration at Fort Deposit, Alabama, Daniels and 22 others were arrested and transferred to the county jail in nearby Hayneville. Released on August 20, Daniels, along with Catholic priest Richard Morrisroe, accompanied two black teenage girls (who had also been in jail for the protests) to a nearby store.

On the porch of the store, a construction worker and part-time deputy pulled out a shotgun and pointed it at 17-year-old Ruby Sales. Daniels knocked Sales to the ground and took the shot. The Catholic priest was seriously wounded, and Sales’s life was saved. Dr. King said of Daniels, “One of the most heroic Christian deeds of which I have heard in my entire ministry was performed by Jonathan Daniels.” Sales went on to become a nationally recognized civil rights activist, and founded the Spirit House, an organization which works on social, economic, and racial justice issues with a spiritual approach.