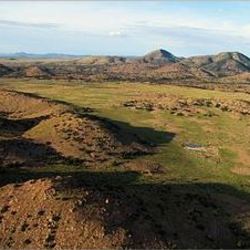 In 1835, the government of Sonora put a bounty on the Apache which, over time, evolved into a payment by the government of 100 pesos for each scalp of a male 14 or more years old. Later, Chihuahua offered the same bounty for males plus a bounty of 50 pesos for the capture of an adult female and 25 pesos for a child under 14. Bounty hunters were also allowed to keep any Apache property they captured. The bounty for one Apache male was more than many Mexicans and American workers earned in a full year. It is unclear, however, whether the scalp bounty was actually paid during the first few years.

A famous and often-exaggerated battle (or massacre) involved a United States citizen named John Johnson, resident in Sonora, who led an expedition against the Apache in April 1837. The Apache had raided near the municipality of Moctezuma and drove away a herd of cattle. Johnson gathered together 17 North Americans and 5 Mexico muleskinners, apparently collected expense money from the Sonora government, and borrowed an artillery piece, probably a Swivel gun, small enough to be carried mule-back from the presidio at Fronteras. Johnson found an Apache encampment near the southern end of the Animas Mountains in New Mexico. Juan José Compá led the group which consisted of, according to Johnson, of 80 men plus women and children. Johnson and his men attacked the Apache, killing 20, including Compá, and wounding another 20. For his accomplishment, Johnson received a reward of 100 pesos and the official thanks of the state government. With the death of Compá Mangas Coloradas (Red Sleeves) became the most prominent Apache leader.

Punitive missions such as Johnson's however, inflamed the Apache rather than intimidated them. The rich Santa Rita copper mine in New Mexico was a principal target of Mangas Coloradas and his followers. In 1838, 22 fur trappers were killed nearby and the Apache severed the mine's supply line. The 300 to 400 inhabitants of Santa Rita fled south toward the Janos presidio, 150 miles away, but the Apache killed nearly all of them en route. Afterwards, the Santa Rita mine was only occasionally in operation until 1873 when Apache chief Cochise signed a peace agreement with the US and the mine was reopened.