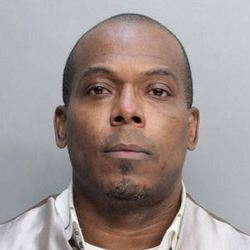 Two detectives on a specialized detail opened fire on a man wanted for murder in Miami on Monday afternoon, killing the man and causing a lockdown of the county’s largest jail facility.

Police believe the man used a screwdriver to kill another man a few days ago, then stole his vehicle. Law enforcement sources said the man was approached by police when they found him inside the stolen gold Jeep Cherokee.

By Monday evening, police had identified the dead man as 47-year-old John Spaulding. They also wouldn’t give details of the murder the man was believed linked to.

Police also wouldn’t say what caused the Miami-Dade Robbery Intervention Detail detectives to open fire. They said the officers began shooting after approaching a gold SUV that the man was sitting in and that a gun was found near the shooting site.

The shooting happened, according to police, just before 2 p.m. on Northwest 41st Street at 70th Avenue. That’s directly adjacent to and on the north side of the Turner Guilford Knight correctional center. Workers there and Miami-Dade police said the shooting was unrelated to the jail.

But because the shooting took place during a shift change there, supervisors decided to lock down the correctional center and cancel visitations for most of the afternoon. The jail is between Northwest 36th and 41st streets. A portion of its north parking lot was closed well into the afternoon as investigators looked for shell casings and other evidence.

It wasn’t clear Monday afternoon if the man pointed the weapon at the detectives or where the gun was found. Police said the dead man was 37 years old.

“Robbery Intervention Detail [detectives] were looking for a subject wanted for murder,” Miami-Dade Detective Alvaro Zabaleta said. “They found him, approached the vehicle and shots were fired. The individual was struck and pronounced dead on the scene.”

Sam Jochananov, who works for TGI Bail Bonds near where the shooting occurred, said he heard five or six shots. By the time he got outside he saw the dead man lying on his back on the road.

“I waited a second or two until the gunfire stopped” before going outside, Jochananov said. “I saw one car speeding, then saw police cars with their sirens.”

The Florida Department of Law Enforcement will investigate the shooting.

Zabaleta said the detectives, who haven’t been named, were searching for the wanted man and found him in the SUV parked in front of a group of bail bond offices. He didn’t say if they approached the man with the intent of taking him into custody.

“The guy shot was wanted for murder in the city of Miami,” Zabaleta said. “Two officers shot. We did find a weapon on the scene.”