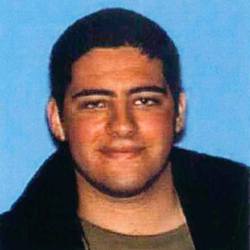 Santa Monica police Chief Jacqueline Seabrooks said police found replica weapons and zip guns during a search of his home. She also said the state Department of Justice denied him a firearm in 2011.

"He had an affinity for weapons," Sgt. Richard Lewis said.

Authorities say Zawahri first killed his father, Samir, 55, and older brother, Christopher, 25, at their Santa Monica home before carjacking a motorist and forcing her at gunpoint to drive him to the campus.

Along the way he fired on other vehicles, including a sedan, a bus and a sport -utility vehicle carrying Santa Monica College groundskeeper Carlos Franco, 68, and his daughter, Marcela, 26. Both died.

Police identified his last victim as Margarita Gomez, a 68-year-old visiting the campus to collect cans.

Sources said Zawahri suffered from mental problems and struggled with the divorce of his parents.