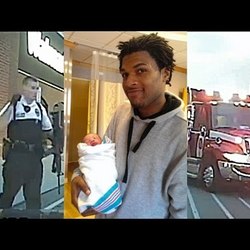 Two police officers responded to a 911 call about a man waving a gun at customers inside a Walmart store. According the Beavercreek police department, 22-year-old John Crawford disregarded officers' orders to disarm before being fatally shot in the chest. Crawford's gun turned out to be a .177 calibre BB rifle that he'd picked up from a store shelf. Walmart surveillance camera footage was turned over to the police but hasn't been released to the public or Crawford's family. "Why did John Crawford, a Walmart customer, get shot and killed carrying a BB gun in a store that sells BB guns?" asked Michael Wright, the family's attorney, during a joint press conference with the NAACP. "All the family demands is answers." The Ohio Attorney General's Office is investigating the

Police said Crawford appeared to have a real weapon and was shot when he did not respond to orders to drop it. Investigators later determined the Fairfield man was talking on a cellphone and holding an air rifle that he had picked up from a store shelf. The family filed a federal lawsuit against Beavercreek police and Walmart, alleging negligence and violation of Crawford’s civil rights. The city and Walmart have denied the allegations. A federal investigation was still ongoing as of the one year anniversary of Crawford's death.

April 2016 Two officers who confronted a man carrying an air rifle in an Ohio Wal-Mart want to further postpone giving formal statements about the deadly police shooting in a lawsuit.

On Monday April 18, 2016, a special prosecutor announced that they declined to prosecute the 911 caller who reported a man waving a gun in a Beavercreek Wal-Mart before police fatally shot Crawford.

In deposition testimony in January 2017 relating to the federal lawsuit filed by the Crawford family, the police officer said he believed he faced an “imminent threat,” although he acknowledges he never saw the man point what turned out to be an air rifle or threaten anyone.

in July 2018, a pathologist expert witness for Beavercreek's prosecution concluded that Crawford did not turn toward Williams and Sgt. David Darkow, citing surveillance video and the entry wounds from Williams’ bullets.

This statement was part of the basis of Crawford family attorneys’ summary judgment filing in the federal civil rights lawsuit filed in Dayton’s District Court.

May 2016 Activists meet to demand justice