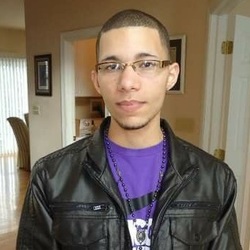 A Denver police officer shot 25 year-old Bazemore, accused of robbing an ANB Bank on the 16th Street Mall as he tried to flee down a nearby alley Friday afternoon while many people were walking down the mall, police say.

Bazemore was taken to a hospital in critical condition, Denver Police Chief Robert White said in a news conference near the scene. He later died at the hospital.

The robbery happened at 1 p.m. at the ANB Bank on the 16th Street Mall between Welton and California streets.

Chelsea Wood, 28, was walking east on the mall in front of the Ink Coffee shop when he saw a heavily bundled man walk casually out of the ANB Bank. He was wearing a gray ski mask over his face, a light hoodie, a winter coat and jeans, she said.

The man, who appeared to be about 5-feet-9, turned left onto the sidewalk and came right toward Wood in no particular hurry.

“He was very hobo-esque. I was looking at him as we passed face to face about six inches away. I thought, why are you wearing a ski mask when you can’t even see?” Wood said. “He was trying to see out of the mask and he couldn’t even see me.”

Just then two men ran out of the bank and screamed, “We’ve been robbed!”

At that moment, the peculiarly acting man with his hands inside his coat took a sharp left turn into an alley.

A Denver police officer had just arrived on his shift, White said. He was less than a block away, Wood said. He came running as the bank men pointed him down the alley, she said.

The officer ran down the alley, yelling orders for the suspected robber to stop. The officer fired several shots, striking the suspect. Police later recovered a gun where the alleged bank robber fell near Dumpsters. There was also evidence from the bank robbery, White said.