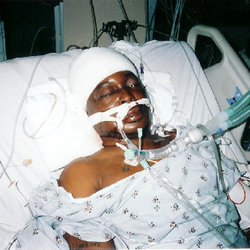 Jesse Lee Williams, Jr. was apparently beaten to death last February by sheriff’s department officials in Harrison County, Mississippi. I’m not sure why he was originally arrested — what I’ve found thus far only mentions “misdemeanors.” What is clear, however, is that he was severely and savagely beaten while in police custody, and died as a result of that beating.

Sheriff George Payne originally told the media that Williams was under the influence of drugs at time of his beating. That excuse proved difficult to defend when Williams’ post-mortem toxicology report later came back clean. He wasn’t even too drunk to drive.

The beating was apparently videotaped by four separate cameras. But six months later, neither the media nor Williams’ estate has been given access to the tapes. None of the officers responsible for Williams’ death have been arrested, though Deputy Ryan Teel, who seems to have been the one who inflicted the most abuse, was finally fired from the police force.

Teel was convicted of civil rights violations and using excessive force against Williams. He was found guilty after a week-long trial in August. The actual sentence was two life terms on the first two counts and 20 years in prison on count three.

Police misconduct in Mississippi drew nationwide attention after the 2006 beating death of a Harrison County jail inmate, which led to a lawsuit filed by the victim’s family and a $3.5 million payout by county officials.

The 2007 settlement was reached by the county supervisors following the beating of Jessie Lee Williams Jr., who was booked on misdemeanor charges of disorderly conduct on Feb. 4, 2006, and died two days later. County officials stated that $1 million of the payout would be covered by insurance, but planned to issue bonds for the remainder of the settlement, Insurance Journal reported.

The settlement involved Harrison County, the board of supervisors, the sheriff’s department and sheriff’s employees.