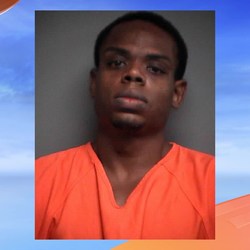 Police say they shot and killed a man who was wanted for the attempted murder of Berkeley County Sheriff's Lt. Will Rogers Thursday after the man emerged from a downtown apartment and opened fire at officers. Charleston County Coroner Rae Wooten said Jerome Thomas Caldwell, 32, of Mount Pleasant died from the return fire, ending a 10-hour standoff with heavily-armed police at the Robert Mills Manor apartments near the Old Charleston Jail.