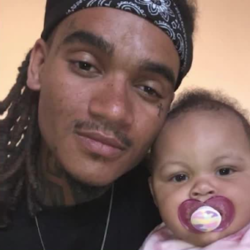 The man was taken to the hospital and was listed in critical condition. Sacramento police said he later died. His identity will be released by the Sacramento Coroner’s Office after next of kin are notified.

The shooting happened after 2:15 p.m. in a courtyard at the Crossings apartment complex in the 2900 block of Ramona Avenue.

"I'm not surprised," said David White, who lives at the complex. "There's a lot of crazy stuff that happens."

White wasn't home when the shooting happened, but his roommate was and told White what he saw.

"He looks out his window, he sees a bunch of riot gear, he sees blood on the ground and sees officers posted up everywhere," White said.

Three Sacramento officers went to the complex Tuesday afternoon to talk to a man who may have been involved in a shooting there last week, police said.

“While on scene, officers observed a subject matching the description of the suspect from that shooting who had a distinctive visible tattoo,” police said in a statement late Tuesday night.

When officers tried to talk to the man, he grabbed a handgun from a satchel and pointed it at the officers. Police said the man did not follow officers’ commands to drop the gun.

"We know, at this point, one officer fired their firearm at the suspect," Sgt. Sabrina Briggs said.

The officer fired shots at the man, hitting him at least once, police said.

On September 1, 2020, family of Jeremy Southern files civil suit against Sacramento for his shooting death by police.