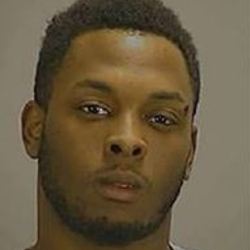 A suspect accused of gunning down a Georgia lawman has been charged with murder in the death of the 25-year police veteran. The fallen officer was struck by two shots as he helped colleagues serve a "no knock" search warrant at an apartment complex near Atlanta, authorities said Friday.

Maj. Greg Barney, a well-known figure in the community of Riverdale, died following surgery after Thursday's shooting, said Riverdale Police Chief Todd Spivey. Friends and colleagues were in mourning and two candles glowed outside police headquarters in the small suburban city of about 15,000.

Barney was shot while helping Clayton County officers serve a search warrant at an apartment complex in Riverdale, south of Atlanta's airport. Riverdale officers, including Barney, were guarding the perimeter while
Clayton County police entered the apartment, police said.

When officers entered the apartment, Jerand Ross, 24, bolted through a back door, the Georgia Bureau of Investigation said in a statement Friday. Barney chased Ross, who shot him once in the abdomen and once in an arm, according to the statement.

The statement added that a Clayton County officer, Lt. Francisco Romero, pursued Ross as he ran behind the apartment buildings. After a short chase, Ross pointed a handgun at Romero, who shot the 24-year-old in the head, the GBI statement added. [He has died in hospital two months later.]