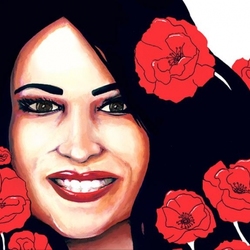 A State Police officer tried to pull over a vehicle for erratic driving, and the vehicle failed to yield, Sgt. Emmanuel T. Gutierrez said in the release. A pursuit ensued at 1:14 a.m., and there was a call to dispatch about shots fired at 1:19 a.m.

The woman driver was dead at the scene, and the male passenger was taken to a hospital complaining of minor injuries, according to the release.

Wilson testified that he got out of his patrol car and walked toward Jeanette’s Honda. According to his testimony, she reversed toward him, and fearing for his safety, he began firing. She then began to drive away, and Wilson kept firing as he ran alongside the Honda, emptying his magazine. A few seconds later, the Honda crashed into a cinder block wall.

Each of the other state police officers who testified about the shooting repeated Wilson’s story.

Muñoz described the sequence differently. He said Jeanette backed into Wilson’s police car in an attempt to position her vehicle for an escape. The officer did not begin firing until Jeanette was driving away from him, he told the grand jury.