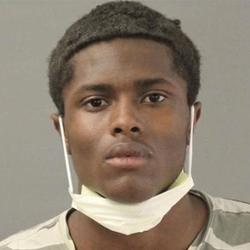 Jaquan Haynes, 18, was shot after he fired at officers who were trying to arrest him, officials said.

Members of the U.S. Marshals Service Southeastern Regional Fugitive Task Force went to an Atlanta home to serve the warrant early Tuesday, the Georgia Bureau of Investigation said in a news release.

When officers knocked on front door and announced that they were police, a person inside the home shot at officers, according to the news release.

The U.S. Marshalls Service later confirmed the man was Haynes, who had relatives in the Atlanta area.

A U.S. marshal and a Fulton County sheriff’s deputy fired their guns, hitting Haynes, who died at the scene, The Omaha World-Herald reported.

Haynes was a suspect in the death of 19-year-old Nomi Herrera, of Omaha, who was found inside a vehicle suffering from a gunshot wound to the head on Oct. 29. She died the next day.