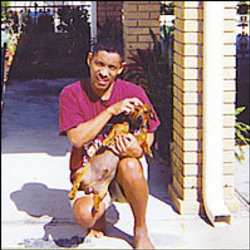 The shootings took place on Sept. 4, 2005, a week after Hurricane Katrina. After hearing a distress call over the radio from another officer who said men were shooting at police on the nearby Interstate 10 bridge, a group of cops piled into a Budget rental truck and headed to the Danziger Bridge, the portion of Chef Menteur Highway that spans the Industrial Canal.

Officer Michael Hunter, who drove the truck, fired warning shots out the window as the truck neared the bridge. He stopped the truck behind the Bartholomew family, near the bridge's eastern terminus. Police piled out and began shooting, eventually killing one member of the party -- James Brissette, 17 -- and wounding four others: Jose Holmes, 19; his aunt, Susan Bartholomew, his uncle, Leonard Bartholomew III, and a teenage cousin, Lesha Bartholomew.

Police then chased down Ronald and Lance Madison, who had been walking toward the Gentilly side of the bridge, a ways ahead of the Bartholomew family. Hearing the gunfire, the Madisons began to run. Ronald Madison, 40, was injured. Eventually, Faulcon killed him with a shotgun blast to the back as he ran away.

Lance Madison, who was unhurt, was arrested and accused of firing a weapon at police.