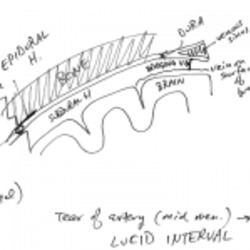 Dr. Charles Ward arrived at the Terrell County Jail in Dawson, on Sunday, April 20, 1958, at about 9:30 p.m. to examine a new inmate, James Brazier. Dawson police had requested that he examine Brazier. Ward, who with his medical partner was appointed by the county and city to examine inmates who might need medical attention, met with Brazier in the jail office and delivered a diagnosis that would become consequential over the last four days of Brazier’s life.[1]

Ward would tell the FBI on April 24, when Brazier was still alive, that while he noticed that Brazier had blood in his ear and nose and that he slurred his speech, he suspected only that Brazier was drunk. He saw lacerations and swelling, he told FBI agents, but he saw “no probability of skull fracture.” He told police working at the jail to put Brazier in a cell by himself and to check on him every couple of hours.[2] He did not ask how Brazier came to be injured. “I never ask such questions,” he said. “I had rather not know.”[3]

By allowing Brazier to sleep alone in a cell and not ordering more urgent action, including an X-ray, Ward appears to have neglected medical protocol. According to Emory University pathologist Dr. Mark Allen Edgar,
when a patient is bleeding from his ear or nose as a result of blunt force trauma, the doctor should urgently call for X-rays to confirm whether a skull fracture exists. Skull fractures often result in an epidural hematoma, which refers to a ruptured artery leaking blood into the brain’s spatial cavity known as the dura.[4]