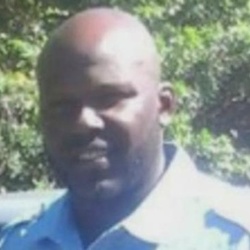 The St. Lucie County Sheriff's Office said Friday that Jamalis Hall, who was wanted for cutting his wife's throat, was killed while a U.S. Marshals task force attempted to arrest him. According to task force members, Hall was inside a van and refused to surrender. He lunged at a task force member with a filet knife, Sheriff Ken Mascara said.