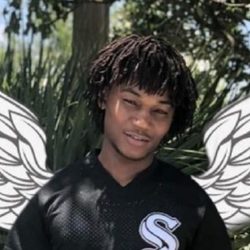 Officer Devin Dunn shot and killed 21-year-old Jah’Sean Hodge following a struggle after he was seen “running erratically” and covered in blood following a 9-year-old girl’s stabbing at a Georgia Avenue apartment, the department said. The family of the child who was stabbed repeatedly inside a St. Cloud apartment said police killed an innocent man as the St. Cloud Police Department released names and 911 calls from that incident.

A second officer initially said to have been part of the shooting did not fire his weapon, the department said.

The girl had wounds on her neck and face and was taken to Arnold Palmer Hospital. Veronica Snyder said her daughter, whose first name is Jadalee, is expected to recover. She declined to provide the child’s last name, which has not been released by police.

Police Chief Pete Gauntlett told reporters Wednesday that Hodge was responsible for stabbing the child. But Snyder said Hodge, her adopted brother, was actually protecting the child from an unknown intruder.

“He saved his niece’s life. He’s a hero,” said Snyder, adding she was not allowed to speak in further detail.