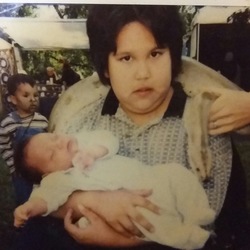 “Everything they said on the news about my brother was a complete lie,” says Montaño. “I don't trust the police, they are racist bullies. Have you seen the Seattle police? In full body armor with assault rifles. Being trained by Israeli military.” He pauses and continues, “One of my kids will be out, and I'll hear a siren,” he sits straight up and abruptly looks out the window, “I sit up at attention. I don't want the cops to kill my kids. I don't want the cops to kill anyone,” says Montaño.

On February 26, 2013, Montaño and Hawk Firstrider each made phone calls to 911 because their brother, Jacksun, was in a mental health crisis at his home and needed help. The police had been called a number of times to help Jacksun get to a hospital to treat flare ups related to schizophrenia and PTSD, in fact Jacksun was even known to call 911 on himself when he was panicked and experiencing hallucinations. On this evening, Montaño and Hawk feared for their brother's safety, and the safety of their father, Henry Northwind, who Jacksun lived with in Seattle. In previous times of crisis, de-escalation and even hospitalization had proven very helpful in reducing harm. This time, however, when the militarized Seattle police department arrived, they had collectively turned off their dash cams and already committed to the irreversible use of Force. The police themselves admit that within 30 seconds of initial contact with Jacksun, he had been shot and was bleeding out on the ground.

Seattle police officers created their own false narrative about Jacksun's killing. They quickly demonized and spread their version of what happened in the media, they interrogated and intimidated his family, they intimidated and possibly paid off neighbors and witnesses. Montaño's home (with his three children) has been watched and photographed by officers in police cars, and both Jacksun's parents are now dead with no pending Federal wrongful death case.

Please support the family of Che Taylor who was killed by seattle police officer Michael Spaulding on Feb 21st,  2016.

This is one of the three cops that killed unarmed Jacksun Keewantinawin!