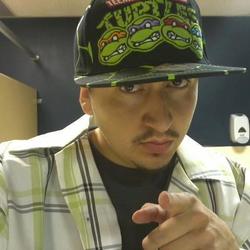 It happened on the corner of Swink Avenue and N. 3rd Street just after 2:30 a.m. Sunday, the CBI said.  They added that  the district attorney's office is involved in the investigation of the officer-involved shooting.

"Details of the incident cannot be released, as this remains an active investigation," the CBI said in a release issued Sunday afternoon.

The victim's sister-in-law said the man walked into this home and then a police officer forced open the front door.

"He was standing next to his mom, his back turned toward the officer, and then (the officer) shot him twice in the back and pepper sprayed him," Sara Lindenmuth told KRDO TV.  "Then, they handcuffed his fiancé for reasons I don't know why."

The request was discussed Wednesday as Ashby, accused of second-degree murder in the on-duty slaying last year of 27-year-old Jack Jacquez, appeared in court for the first of three days of motions hearings.

Investigators say Ashby followed Jacquez into the home of Jacquez's mother and fatally shot him in the back in October 2014. Ashby told investigators he thought Jacquez was a burglar, court records show, but officials say the former cop had no reason to believe Jacquez was committing a crime.

On Thursday, June 23, 2016, former Rocky Ford police Officer James Ashby was convicted of second-degree murder for killiing Jacquez in his mother’s kitchen, becoming the first Colorado officer to be found guilty of murder in an on-duty death in decades.

Ashby had pleaded not guilty and had been on trial for more than a week. Jurors began deliberating midday Wednesday and returned Thursday morning before handing down their findings.

On October 11, 2016, relatives of Jacquez filed a lawsuit in federal court. The suit says the department failed to discipline former officer James Ashby for other excessive force cases before he killed Jacquez in October 2014.

On October 27, 2016, former Rocky Ford police Officer James Ashby was sentenced to 16 years in prison for the killing of Jacquez.