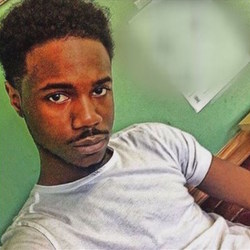 As officers conducted their investigation, a man who was involved in the dispute and later identified by the Georgia Bureau of Investigation as Jabril Robinson ran to another house and forced himself inside, police said. The homeowner “forcefully removed” Robinson from the home, called 911 and told dispatchers he saw the man run behind another residence along Highway 314 and Kings Road.

“It appears [Robinson] attempted to force his way into the rear of that residence as well but was unsuccessful,” Clayton police Sgt. Ashanti Marbury said.

When officers got to the second home, they saw Robinson behind the third home. According to police, he was holding a loaded gun and aiming it at them.

Despite several orders to drop the weapon, Robinson refused to comply with officers, Marbury said. He and the officers exchanged gunfire and at least one shot hit Robinson, Register said.