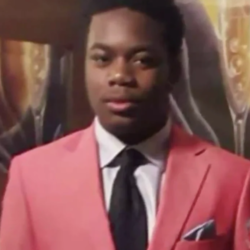 Police in Oklahoma shot and killed unarmed black 17-year-old high school student Isaiah Lewis who was running around a neighborhood naked on Monday.

Authorities began searching for Isaiah Lewis in the suburb of Edmond after receiving a 911 call from a woman who said two girls had run up to her house to ask for help after one of them had allegedly been assaulted by the teen.

One of the girls then told the 911 dispatcher that her boyfriend had “flipped out” and had been acting weird since arriving at her house.

Authorities allege that both officers were “violently assaulted” after they followed Lewis into an unoccupied house. The officers then deployed a Taser on Lewis “multiple times without effect,” police said. At least one officer then fired his handgun multiple times, striking Lewis.

The officers began first aid on the teen before he was transported to a hospital, where he was pronounced dead on arrival.

Neither officer was wearing a body camera. The Police Department is in the process of issuing body cameras later this year, Wagnon said.

Pollock said that she and Lewis were arguing at her front door while a woman was delivering food to her house. Pollock claimed that the delivery driver then began screaming for somebody to call 911.

Lewis was days away from graduating from Boulevard Academy, an alternative high school that “focuses on academic credit recovery in a smaller learning environment,” Susan Parks-Schlepp, a spokesperson for the Edmond Public Schools, told BuzzFeed News in a statement.

In a press conference Wednesday, Lewis’s mother demanded answers from authorities about her son's death and criticized them for trying to "assassinate my son's character," Fox 25 reported.

On September 23, 2019, the Oklahoma County District Attorney announced that two Edmond officers are cleared in the April shooting death.