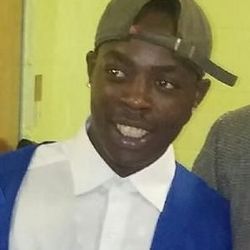 St. Louis police shot and killed a 19-year-old man who allegedly refused orders to drop a gun after a brief vehicle pursuit, authorities said Thursday. The St. Louis Metropolitan Police Department identified the man as Isaac Holmes of St. Louis. Two patrol officers saw a red Chevrolet Monte Carlo make an unspecified traffic violation Wednesday night, according to an incident summary by the Police Department. When the officers tried to stop the car, it sped off, the document said. Additional officers were called to the area. Two officers then saw the car near the intersection of Cottage and Marcus avenues and followed it. The car went down an alley but ran into a concrete retaining wall. Holmes, who was a passenger in the car, got out of it holding a loaded 9-millimeter pistol with an extended, high-capacity magazine, police said. The officers exited their car and told Holmes to drop the weapon, but he did not comply and the officers opened fire, the document said. Holmes was taken to a hospital where he was pronounced dead, according to the police report.

It was reported on July 19, 2016 that the two St. Louis police officers who killed Holmes would not be charged in the fatal shooting, after a special prosecutor ruled that they acted in self-defense.