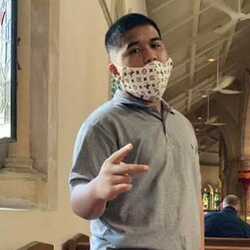 The Honolulu Police Department (HPD) alleges that, on April 5, 2021, 16-year-old Iremamber Sykap was driving a stolen Honda linked to an armed robbery, burglary, purse snatching, and car theft.  Sykap lead HPD officers on a car chase which culminated in a shooting.  According to Officer Geoffrey Thom, at one point Sykap rammed the Honda into his patrol car.  When Sykap stopped at an intersection, Thom fired 10 rounds at Sykap through the rear window "without provocation" according to court documents. Two other officers, Zackary Ah Nee and Christopher Fredeluces, also opened fire.  Sykap was taken to a nearby hospital, where a trauma surgeon said he was almost immediately declared dead.  Mark Sykap, Sykap's brother, was in the car and suffered gunshot wounds to his right should and left wrist.

HPD claims that one other passenger, carrying a bag, ran from the car before the shooting.  They also claim that when they later found the bag, it contained a starter pistol; however, the department's firearms experts concluded that the pistol did not constitute a firearm.

According to prosecutors, while Officer Thom claimed Sykap rammed the Honda into his patrol car, body cam footage does not show that, and that his patrol car in question had only minor paint chips and scuffmarks.  Court documents say that the Honda was in drive mode when Thom opened fire, and that after Sykap was shot it started moving forward and then struck an empty patrol car.  Ah Nee opened fire as the Honda then climbed onto a sidewalk, went through a fence, and landed in a canal.

Sykap's mother and grandmother filed a wrongful death lawsuit against the officers and the City of Honolulu, alleging neglience, assault, and battery.

The prosecuting attorney's office can still seek charges against the officers through a preliminary hearing.  In June 2021, a preliminary hearing determined was probable cause for murder and attempted murder charges.  Thom was charged with one count of murder in the second degree while Ah Nee and Fredeluces were each charged with one count of attempted murder in the second degree.  As court proceedings begin, the officers will have their powers removed and be assigned to desk duty.

If convicted, all three officers face up to life in prison without parole.

In July 2021, both police supporters and those in favor of the HPD officers being prosecuted gathered outside the courthouse during the preliminary hearing.