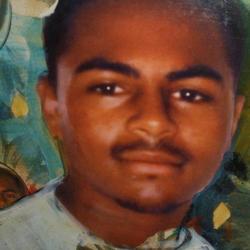 Idriss Stelley, 23-year-old multilingual honor student and son of Mesha Monge-Irizarry, died of 48 gunshot wounds fired by nine San Francisco Police officers as he stood unarmed and alone in San Francisco's Metreon Movie Theatre on June 13, 2001.  He was suffering a mental health crisis at the time.

For months he'd been tuned to his own channel, behaving bizarrely, neurons apparently misfiring. Everyone was worried.

Stelley had seen a psychiatrist a few times but soon decided the doctor was plotting against him and quit showing up for appointments. That was followed by the debacle with his school, Heald College, where he studied computers. First Stelley was convinced that school administrators were pumping poisonous chemicals through the air ducts to sicken him. A few weeks later he decided Heald was really a front for a secret military recruiting center.

On this day, though – June 13, 2001 – the charismatic, biracial, trilingual 23-year-old was making even less sense than usual. In the throes of a dark, uncommunicative mood, Stelley didn't want to talk, didn't want to play chess or read, his usual favorite activities. He didn't want to do anything.

And then Stelley's girlfriend, Summer Galbreath, suggested a movie. They wound up standing in line at the Sony Metreon, at Fourth and Mission Streets in SoMa. "What's the best movie to see?" Stelley asked the dude at the ticket counter. The ticket seller recommended Swordfish, the John Travolta bomb. "Two for Swordfish, then."

In the theater, according to Galbreath, Stelley downed two or three shots of tequila. On-screen Travolta lit up a smoke. So did Stelley. Soon the ushers were giving him grief, and Stelley was getting agitated.

Stepping out of the theater, Galbreath used her cell phone to call Stelley's mother, Mesha Irizarry. Irizarry had a succinct plan: call the cops and tell them he's in the midst of a mental breakdown. The police, she figured, would be able to help.

A horde of San Francisco police officers arrived while Galbreath was on the line with the 911 operator. Clearing moviegoers out of the theater, the police swarmed in.

From the hallway of the Metreon, Galbreath called Irizarry back. Minutes later the cops unleashed a barrage of gunfire, slaying Stelley and leaving bullet holes in his head, chest, abdomen, buttocks, right leg, right foot, left arm, right shoulder, and right arm. Irizarry heard the shots over the phone.